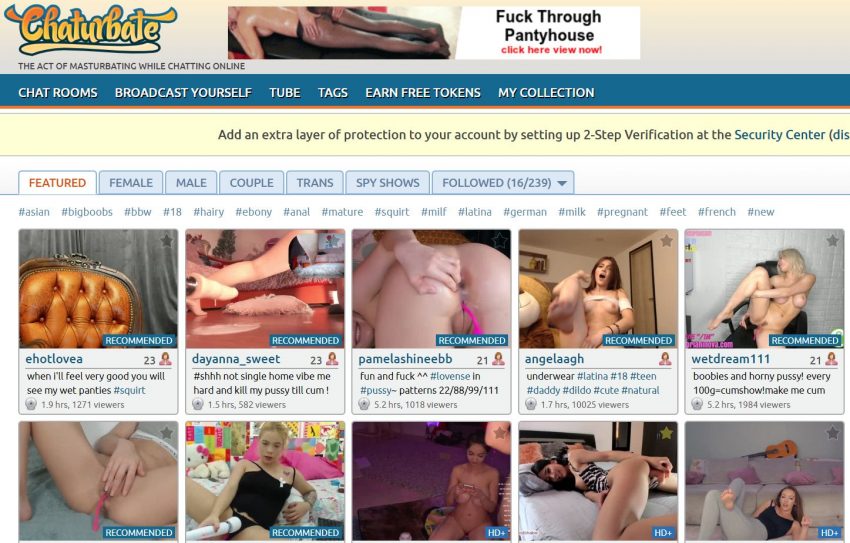 Chaturbate is so much more than just a cheeky portmanteau! Hosting thousands of amateur cam models and even more members, this virtual titan is taking the live cams world by storm! Launched in 2011, Chaturbate quickly became a global superstar in the camming industry by refining the “freemium” format. . While premium camming sites don’t allow nudity in public chat rooms, Chaturbate takes a wholly different approach, using free live sex to entice high volumes of viewers into tipping more and more. But what sets Chaturbate apart from your run-of-the-mill freemium cam site?

What Exactly is Chaturbate and Why is it So Popular?

At first glance, Chaturbate’s homepage looks just as you’d expect: an array of thumbnails on a stark white background with a few buttons and tabs for navigation. The site features female, male, trans, and couples’ cams from all over the world. These cams are neatly categorized by popular tags, age, region, and price. Prices on Chaturbate are listed using the site’s unique currency–tokens–which convert to roughly $0.05 USD each. You’ll definitely have the chance to run into a few explicit sex shows for free, but to get the action going, you and other members in the performer’s chat room have to throw in a few tokens first.

Models on Chaturbate.com usually promise something to their viewers in exchange for a goal amount of tokens accumulated over a given period of time. This has historically been the case but as we shared in our article about changes to features on chaturbate lately there also maybe are larger emphasis being placed on private cam shows at Chatterbate as well. That said, we also recently shared how to search new Chaturbate girls as well.

Tokens are most commonly used for tipping toward a performer’s goal in Free Chat, but Chaturbate does still host private shows. Get your favorite streamer all to yourself and direct your wildest fantasies. You can even broadcast your webcam while in private to put on your own sexy show. Some cam models even allow members to save recordings of their private shows, which you can access on your account’s virtual collection. If you’re a more hands-off type who still wants to see a model’s intimate side, try “spying” on private shows instead! While you’re spying, you won’t be able to interact with the model, but you’ll get to see all the hot action at a discounted rate.

What Does Chaturbate Cost? Is it Safe and Legit?

If so, you might benefit from the site’s “Supporter Membership,” a $19.95 monthly upgrade that grants subscribers the ability to privately message models, get rid of ads, and access exclusive chat features. As an added bonus, Chaturbate even gives Supporters 200 free tokens. That said, there is really no need to pay this membership fee. Most people just refill with 100 tokens at a time and enjoy a mix of free nude tipping cam shows plus some private webcam shows.

Models with the most viewers in their chat room at any given time are highly rewarded on Chaturbate. Sometimes this means managing thousands of viewers at the same time! Every hour the site distributes small cash prizes to these highly popular streamers, regardless of how many tokens they are earning during their broadcast! To keep members entertained, Chaturbate employs a slew of enticing features like interactive apps and bots, custom emojis, and extensive profile personalization. It’s not uncommon to see top models with eye-catching bios and deals for viewers to browse.

Chaturbate also allows models to sell photos and clips directly on the platform, making finding your favorite streamers’ content a breeze! If you’re lucky enough to get on a model’s good side, you may even get the chance to moderate their chat room by monitoring and weeding out unwanted guests. Become a member of your favorite streamers’ fan clubs to unlock exclusive content and get special attention in their chat room.

Chaturbate provides a versatile viewing experience for every type of live cams fan and provides a captivating interface with fully loaded features. The interactivity of the chat rooms definitely keeps energy high on Chaturbate and there’s so much to do on any budget–even a nonexistent one! HD streams are the norm on Chaturbate, so you’re bound to run into a top performer who can blow your mind.

With so many ways to play and so many sexy models to play with, Chaturbate is an obvious go-to for anyone looking for on-demand cam sex with the hottest babes online.

Give Chaturbate a try for yourself at Chaturbate.com. Since it is one of the only truly free sex cams sites on the web you don’t have much to lose. Also see where it ranks among the best cam sites.